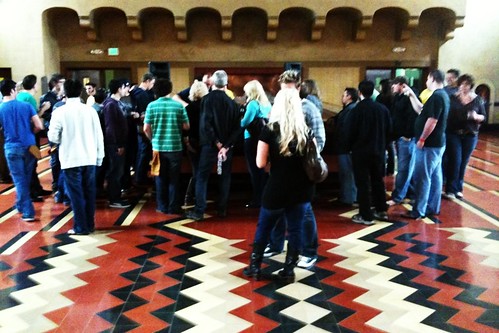 [/caption] There’s quite a lot going on this weekend - or more specifically, this Sunday, in Los Angeles. It’s almost too much to bear. I’d love to go fishing with chefs, taste all of Abbot KinneyÂ (I’ll be there at the tail end)Â and visit Malibu for Los Angeles Magazine’s The Food Event - but it just can’t be done. They’re all not only on the same day but during the same time blocks and in the far reaches of the city. Instead, I’ll be toasting the finale of the 3rd andÂ best LA Beer Week to ever have existed. Technically, it should be called “LA Beer Weeks” since it now spans over 14 days, but I guess that might sound funny. At Union Station from noon til 4 on Sunday, 70 breweries will be on hand to pour 4 ounces in your little LA Beer Week Festival mugs. The pours are unlimited - and that’s all you need to know. Be sure to visit your favorite breweries first before those babies are gone. There will be rare, festival-only beers offered so be vigilant. And like last year, this festival will likely be sold out, and very soon. No ticketsÂ will be available at the door, so reserve your $45 ticket before you miss out! Go Metro!